What would you draw for the word ‘kettle’ in a game of Pictionary? This is my

16 year old’s attempt: although we’ve never owned a kettle which looks like this drawing, somewhere in his mind there exists an imprint of such a form: a kettle archetype.

Without even realising, we all store a range of these object archetypes in our minds. And as creative thinkers, we must allow ourselves to explore these preconceptions and be ready to question what we unconsciously know.

I’ve chosen four objects to discuss this, not necessarily because I see them as examples of great design; rather for their role in demonstrating how challenging the expected can yield surprising and sometimes groundbreaking results.

I’ll go further and imagine that the designers behind each of these objects perhaps started their journey by asking themselves: ‘WHAT IF…?’

WHAT IF…we dried our hands facing downwards instead of up?

For decades, hand dryers looked like variations of this (left), blowing warm air to evaporate water from wet hands. Then in 1994, Japanese company Mitsubishi literally turned the industry on its head by introducing the first hand dryer designed to blow water away from the hands as they pointed downwards. We can only speculate whether this radical rethink of how hand driers work came about in response to public toilet users’ frustration with water trickling down their sleeves, but I like to imagine someone in the Mitsubishi design team at some point in the process asking themselves: ‘What would happen if…?’.

WHAT IF… we took away the blades from a fan? 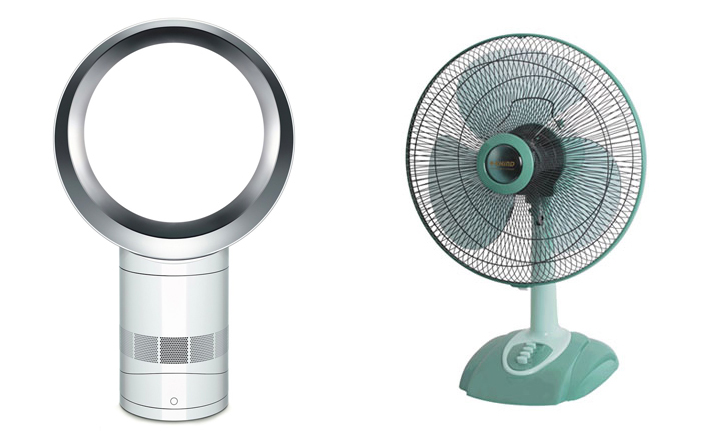 The Dyson  Cool fan is a popular object in the Design Museum handling collection. Many young people, having not seen it before, are delighted to discover its function, marvelling at the cool air circulating without a spinning blade in sight. We expect a fan to look like this (right); when it doesn’t, we are intrigued.

WHAT IF…  we only had one button instead of twenty?

The Boomboxes of the 80s and 90s (left) were all about volume, in every sense of the word: the more buttons, switches and dials they had, the better. A couple of decades later Apple introduced the first iPod, reinventing how we select, control volume and scroll through options, and changing the way we interact with our gadgets forever. The rest is history…

WHAT IF… the clock face would move instead of the hands?

Around clock by Anthony Dickens is a reimagining of the classic clock form we all know from the earliest age. Its body slowly moves in circular motion while the needle remains stationary, showing the time. A small but perfect example of what can happen when you question even the most obvious of things.

I’ve used these examples with many groups of young people, and it has worked especially well as a starter activity. Following this, you can challenge your students to take an archetypical everyday object and reimagine it, using ‘WHAT IF…?’ to help them move away from what they already know and venture in to less familiar territory…